Keep Lightning McQueen out of the Sheriff’s Reach

Note: I get commissions for purchases made through links in this post.

Lightning McQueen’s Close Call (P5370) is a good starter set especially for those who have enjoyed the Cars movies. You get three vehicles – McQueen, Trev, and the Sheriff – that you can use to create some exciting action on the tracks.

The McQueen car comes with a remote controller; Trev Diesel and the Sheriff are push vehicles. All the track pieces are elevation style, so McQueen can easily make it up the mountain from either direction on his own.

It’s intended that Trev start on the one tan rail track included in this set, because he’s a train. However, since all GeoTrax track pieces are really equal in this regard, you can drive him along the dark gray road tracks as well.

The converse is also true then. If you have rail (or other types of) track pieces from other sets, you can just as easily let McQueen and the Sheriff travel along them too.

The Close Call set comes with just a couple of items you could call accessories. There is one special railroad crossing sign, which you would normally set up near the crossing where Trev would be chugging through. The other item is the Radiator Springs billboard which is a nice touch adding to the theme of the set. It works well near any of the road tracks.

Check the availability of this set at Amazon.

The McQueen set was both released and later discontinued in 2009 and consists of the following pieces. 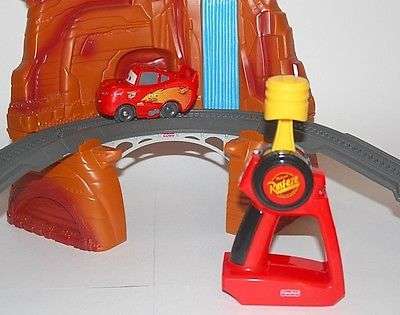 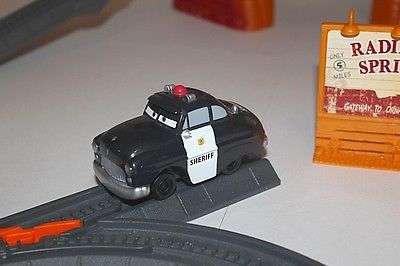 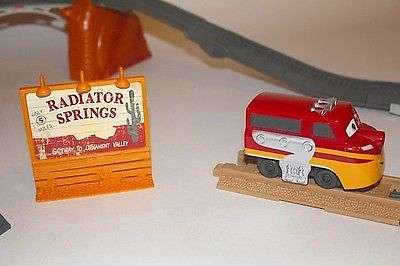 Get Lightning McQueen and friends at Amazon now.

Any cookies that may not be particularly necessary for the website to function and is used specifically to collect user personal data via analytics, ads, other embedded contents are termed as non-necessary cookies. It is mandatory to procure user consent prior to running these cookies on your website.